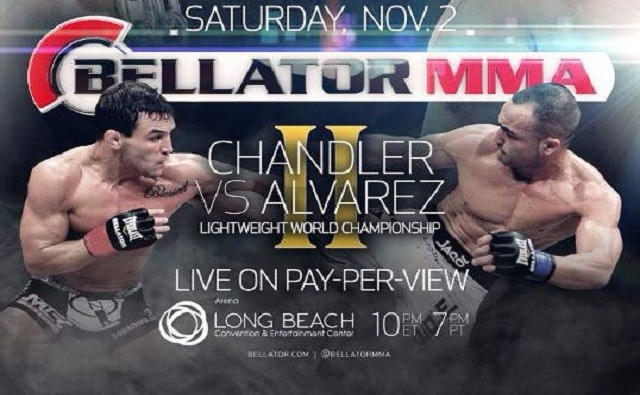 The past twelve months have been rough for a Philadelphia sports fan. All four major franchises were kept from the playoffs and forced to hire new coaches. Chip Kelly, head coach of the Philadelphia Eagles, is currently the longest tenured coach. Usually fans are supposed to give new head coaches some time to bring in their players and system, but it is hard to be patient. Because of some contract disputes we were all forced to be patient awaiting the return of Philadelphia’s favorite mixed martial artist, Eddie Alvarez. But he’s back! We don’t have to be patient anymore.

It has been a year since Eddie Alvarez has fought, but he has been able to keep his name in the news. After bolting from Bellator MMA for the Ultimate Fighting Championship, his contract was claimed to be matched by Bellator keeping him in the promotion he helped build. Originally, Alvarez did not feel Bellator had matched the UFC contract, but that changed. Alvarez returns tonight when he takes on current Bellator Lightweight Champion, Michael Chandler at Bellator 106. This is a rematch from 2 years ago when the two slugged it out in one of my all-time favorite fights before Chandler submitted Alvarez in the fourth round.

While Alvarez has been fighting in the court room and not in the cage, Chandler has been destroying cavemen’s stone chins, submitting Olympic judoka, and starring in Dave & Buster’s commercials. Going has been pretty good for the 27 year old former collegiate wrestler from University of Missouri. He was even about to be featured on his first pay-per-view card tonight until Tito Ortiz was injured and Bellator decided to give it to us for free on Spike TV. Chandler has looked extremely fast and powerful in last outings, showing some lighting quick hand speed. This fight will not disappoint. Some people even felt Bellator should have kept this card as a PPV.

Alongside Chandler vs. Alvarez there are two title fights and the “Fight Master” tourney final. Muhammed “King Mo” Lawal will rematch Emanuel Newton for the interim light heavyweight title. There has been some drama between these two since Newton knocked out Lawal with a spinning back fight. Both have been talking on the many different MMA radio shows and podcasts and sometimes even the same one at the same time. Lawal claims the punch is lucky and vows to prove that tonight. The winner of this fight will then face current Light Heavyweight champion Attila Vegh, who is sidelined with an injury.

Reigning featherweight champion, Pat Curran will defend his strap against Daniel Straus. Straus is another fighter who has been out of the cage for almost a year since winning a Bellator featherweight tournament. Straus was impressive winning his tournament and everyone was excited there was a new challenger for Curran. While I was not a fan of Bellator’s reality TV show but Joe Riggs and Mike Bronzoulis get to ride the coattails of the championship fights. The winner of this fight gets a….I have no idea because I didn’t watch the show and I’m sure you didn’t either, so can’t wait for season 2.

Tonight’s Bellator 106 card looks great on paper and I see no way the title fights do not deliver. It doesn’t matter if Lawal takes down Netwon for five rounds and pummels him into oblivion or they come out brawling and Newton again catches Lawal. The fighters in these fights and the storylines behind these fights are intriguing enough as it is. Maybe Bellator could have kept this a PPV, but they are doing us a favor by putting this on free TV. Here’s hoping this one’s on my DVR for awhile.