Vitor Belfort’s next fight will be in the light heavyweight division, but in my opinion, that is not where he should be fighting at this time. He has done more than enough to be the next in line for the middleweight title after the rematch is done between Chris Weidman and Anderson Silva. While he is being a good company man by taking this fight with Dan Henderson, which is a very intriguing match up, he might be wasting some “fight life” in the process. You could almost argue that he should be the one fighting Chris Weidman, but with the UFC’s rematch policy for top defending champions, there is no room for him at this current career crossroad.

Vitor is moving up a weight class again, where he has also challenged for a title as well. A fight where he almost beat the light heavyweight champ, and current pound for pound king, Jon Jones by armbar. His only losses in the past relevant 5 years were to champions at the time, and he didn’t look too shabby in the process, even when the famous front kick landed from The Spider. If you were to ask me what I thought of that fight, I would say that he was chasing him down, cutting him off, and ready to unload some damage. At the time, when that kick landed, it was very rarely seen, and now today, we see them very frequently. He ended up losing by a game-changing blow in this ever evolving sport.

I was reminiscing about the first time that I saw Vitor Belfort fight, he was only about 18 years old. It was on a UFC VHS tape, where I watched him storm Wanderlei Silva in a lighting fast flurry of punches that stopped one of the most intimidating fighters at that time (and even now), and that was 15 years ago. Belfort has knocked out the current 4th and 6th ranked fighters in the first round, in his division, and if a newcomer to the UFC did that, we might not be seeing a rematch between Weidman and Silva. Vitor has been feared for his hand speed & power, and that’s not even what has been getting him his finishes lately. He knocked Michael Bisping out with a head kick that would scare any middleweight contender. If that wasn’t enough, he placed a beautifully timed wheel kick that sent Luke Rockhold down the ranks in his UFC debut. Many people were holding Rockhold to a very high standard before his UFC debut, being the former Strikeforce middleweight champion, and looking stellar before he entered the octagon for the first time. 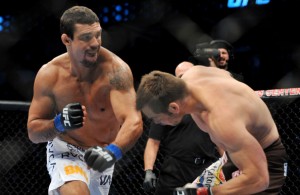 Vitor has not had the cleanest of records at various different points throughout his storied career. Many fans don’t like his TRT exemption, and he has to fight in Brazil due to it, since he would not be allowed to get a TRT exemption in Nevada. The reason being, is he was caught at Pride 32 by the Nevada State Athletic Commission for a banned substance. In his defense, one could argue that from the initial blossoming of the sport, and guys figuring out what works and what doesn’t, he might have fallen into a supplement trap. I only say this because i saw my oldest brother being a guinea pig to a lot of the currently banned substances working at a Max Muscle location in the Mid 90′s, and these seemed beneficial to recovery and training. There was a long feeling out process to what you could and could not do in the beginning stages of MMA. Look at Mark Kerr for example, was that dude being tested? Was Ken Shamrock? There was definitely a trial and error process to what we call “the guidelines” today. Case in point, they just raised the bar on how much weed you can have in your system, so obviously this drug testing is an ever-evolving topic. At any rate, when Vitor got popped, he actually lost to Dan Henderson, who he actually has a rematch against in his next upcoming fight. Vitor has won by headkick knockouts in his last 2 fights, the timing for those kind of blows, to top level opponents, doesn’t come from anything other than solid skill, and timing, in my opinion. Especially, since we have seen him do it numerous times throughout his career. Fighters have even used TRT exemptions, and have not even won their fight, so it’s not like its some ultimate game changer. Vitor might have been one of those lab rats back in the day, which could ultimately have affected his body in certain ways today. That said, I don’t believe TRT, or steroids in general, are the reason for his current success, since he finished top fighters throughout his career in brutal fashion. 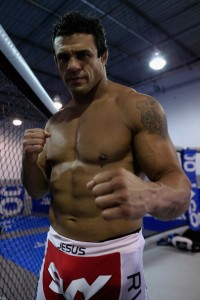 Since this fight was first announced, we have had a lot of activity in the middleweight division. Belfort is fighting Dan Henderson this Saturday, and I can almost guarantee fireworks in this fight! Whenever Dan gets in there with a Brazilian, something special happens, and we should all expect that with this match-up. Honestly, I don’t see a positive outcome for Hendo in this fight, other than him unintentionally showing the world how great of a fighter Vitor Belfort really is. Belfort should be holding out for a title shot, and only be focusing on that, as far as this career-concerned fan is. He is definitely a phenom, but even a phenom can lose the battle to “father time” eventually. The title picture has changed now that Lyoto Machida is lurking in the muddy waters. Personally, I would have liked to see him fight Jacare for a top contender spot, AFTER Vitor gets his title shot. It does appear that Machida is fighting Gegard Mousasi. Lets give credit where credit is due, and give the man his fair due. The scariest part for me is, a guy like Machida leap-frogging Vitor for a title shot, and that is my main concern right now, as a fan.