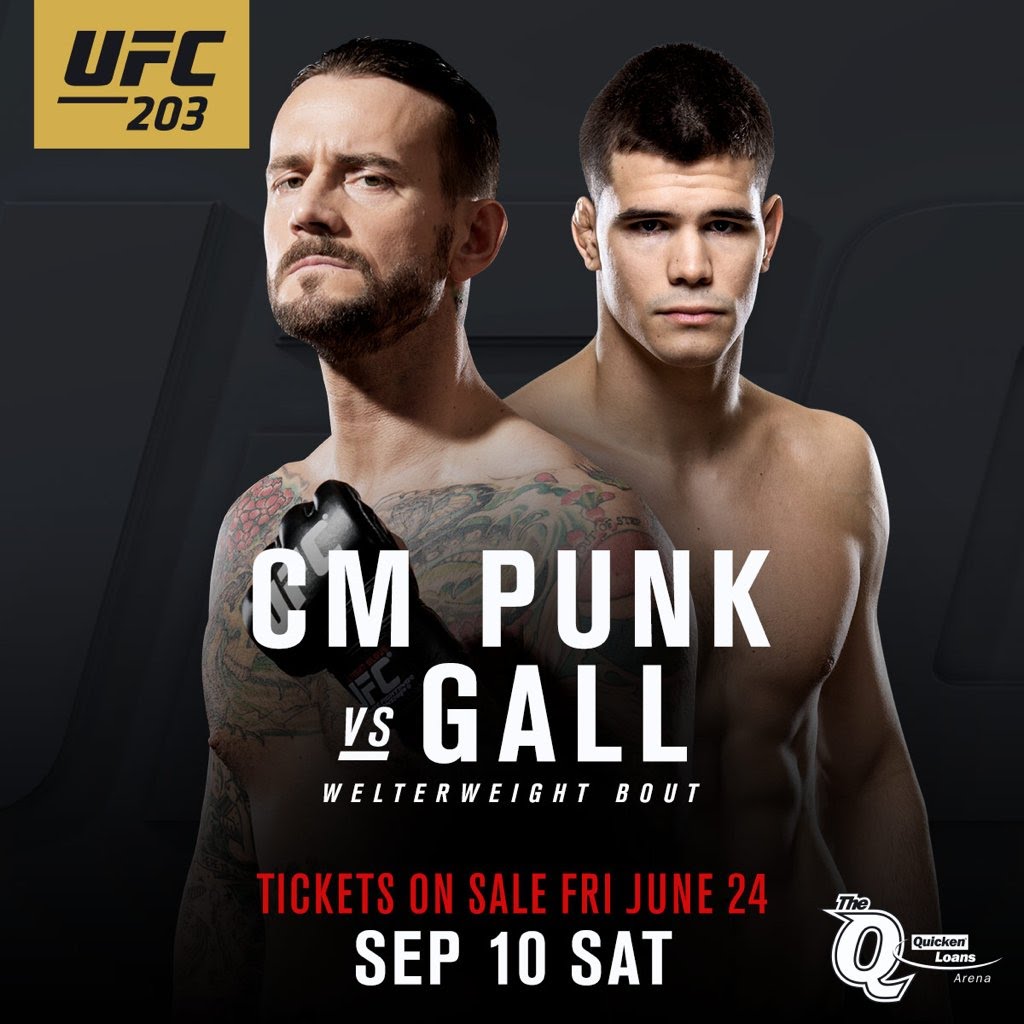 Philip Jack Brooks makes his pro MMA debut at UFC 203 and will be the first man to do so without having a previous fight anywhere. As a competitor in the WWE, where he advocated for a straight edge lifestyle, CM Punk had a very physically demanding gig, but not comparable to being under the bright lights of the octagon and fighting for your life, literally. Despite what he has learned at Roufus Sport, and headlining numerous WWE cards, this event will undoubtedly be a rude awakening for the MMA newcomer. Its one thing to spar in training camp, and have a simulated contest with your coach holding a stop watch, but it’s a completely different animal to handle octagon jitters in your very first MMA fight, amateur or professional, in front of 15,000+ people. Will he be able to handle all of it? Will 2 years of hard training, with one of the best trainers in the sport, be enough to hold up in the UFC octagon in real time? We will find out for sure this weekend. Oddsmakers surely don’t think so, with odds of (-450) and above, for his opponent, Mickey Gall.

Brock Lesnar came to the UFC the proper route. Training for quite a long time, and having a fight outside of the UFC, where he demolished his competition with ease. At which point we knew Brock was for real. A true freak among freaks: walking on to an NFL squad and almost making the cut, winning the heavyweight championship for a Division 1 NCAA wrestling program, redefining the UFC heavyweight division with his speed & athleticism, topped off by a willingness to be a heel and carry over some of the WWE-style trash talk to keep the masses entertained. Unfortunately, we don’t have a preview fight for CM Punk, all we have is a 30 minute clip of him sparring, and I’ll be honest, he looks very slow and green, for lack of a better word. One thing I will say though, he has been quite respectful in the campaign for his first UFC match, leaving the WWE antics out of his anticipated debut. It seems he really does respect the fight game, and truly wants to be a pro-fighter. Whether two years of hard, cross-discipline training, at one of the best gyms in the world for MMA, prepares him for a win, in his very first fight at the premier organization in the sport, is yet to be seen. If all goes well at UFC 203, Dana & Co. might have another superstar on their hands.

Micky Gall is a New Jersey native out of the Miller’s Brothers fight team led by Jim and Dan Miller, who are long time UFC competitors. Gall is the man trying to ruin CM Punk’s splash into the big spotlight. So many other up-and-coming fighters have wanted this fight, because they know it’s a big money fight, not only now, but for their future (being booked as the man to beat CM Punk). Huge potential for a career changing, life altering event, as we have seen with Nate Diaz recently, becoming a household name, after 10+ years in the game, only after fighting the biggest star in the sport. This is the same type of scenario, but on a much smaller scale. You can’t argue the fact that CM Punk is very well known to a lot of WWE crossovers. Gall is the perfect opponent for CM Punk, since he only has a few fights under his belt. Coming off a win in his UFC debut, makes him a good fit for the role to welcome the WWE star. The organization wouldn’t match him against someone with a losing record because it would appear to be too much of a gimmick. So now we have a real fight on our hands, against a decent up-and-coming fighter.

The powers that be obviously want CM Punk to win, so they can slowly build another marketable superstar, to sell more pay per views. Building matketable stars has been the UFC’s business model for a while now, and no one should expect it to change. We don’t know anything about CM Punk’s fighting style, besides what we’ve seen in the clip above. A smart mind would think that the 4 billion dollar organization has put a winnable opponent in front of Punk, given what they know, and as far as predictions go, I tend to side with the UFC’s “needs” in most fights. I highly doubt they would let this opportunity for another mega star start off with an ‘L’.