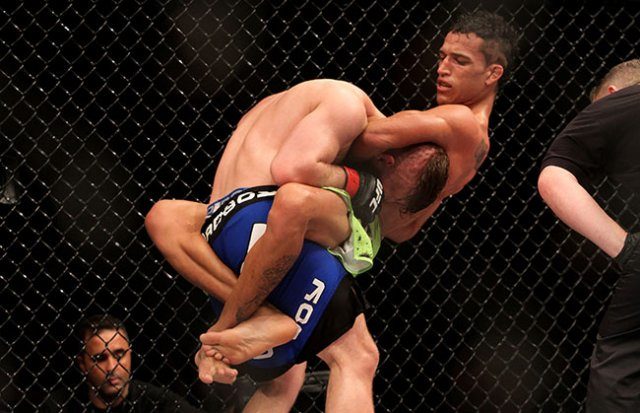 This is a fight between botched Featherweights, back up at Lightweight, where a “quitter” faces a submission-prone aging veteran. It may seem like an over simplification of this match-up, but Clay Guida has always been exceptionally submission-prone dating back to the start of his career, and with his chin starting to show some cracks as well, he is far less durable than the Guida of old.

Charles Oliveira had all the makings of a star; the confidence, skills, athleticism, youth, and reach. Just about anything you could ever want in a young fighter, but once he started hitting some adversity, he stumbled, and has continued to do so every time he faces the upper echelon of the division. But there is still one type of fighter that ‘Do Bronx’ thrives on beating… That’s a fighter who routinely leaves his neck exposed, and that’s exactly what type of fighter he is facing in Clay Guida. It may not pan out at times (Paul Felder was oh so close) but the majority of the time it’s ripe for the pickin’, so to speak.

Normally, I would just play Oliveira ‘via submission’ or ‘in the distance’ to maximize our reward, as they’re really his only path to victory. Let’s be honest, if it goes to deep waters or to a decision, he has lost this fight, in my opinion. However, in this situation, the Money Line has dropped enough, and is so close to the odds for both the ‘ITD’ and ‘Via Sub’ Props, that there’s really no need taking the extra risk for such a small difference in price.