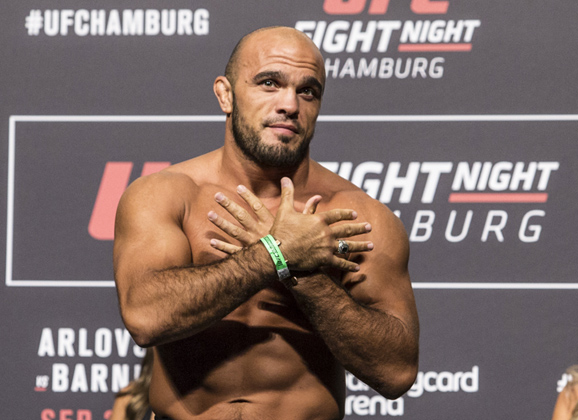 In the barren waste land that is the UFC’s Light Heavyweight division, it is proving-grounds time for the upper part of the division, as the “True Champion” Jon Jones has been out over a USADA violation, and the current champ is returning to the Heavyweight division, to take on its Champion Stipe Miocic. At this point, there are very few ranked 205ers coming off a win, let alone a winning streak, so every “flashy” performance will bring that fighter a huge step forward towards title contention.

Ovince St. Preux already had a shot at the title (Interim, though it may have been), and was soundly beaten by P4P great Jon Jones (no shame in that). Currently, OSP is on a 3-fight win streak with one of his highest ranked wins coming in his last outing, versus Corey Anderson, who he was actually down on the score cards to, before a 3rd Round TKO gave him the victory. OSP is explosive, with flashy techniques, that cover distance quickly, coupled with his length, produce strikes coming at odd angles that many of his opponents are not ready for. Nearly every time that St. Preux has the wrestling advantage in a fight, he wins handedly. But, when he doesn’t, he faces an uphill battle, and has found 2 of said wrestlers’ lack of chin, a warm welcome to the wrestling clinic he faced.

Ilir Latifi wisely took a full year off after his brutal KO loss to now Bellator Light Heavyweight Champion, Ryan Bader. In his return fight, Latifi soundly beat new 205 prospect Tyson Pedro, ruining his then undefeated record. Only being 5’8”, Latifi is a fire hydrant of muscle, with power, that lands hard strikes, and drives through takedowns. OSP will be the more athletic, and flashy, of the two fighters. But Latifi, if necessary, can duck under, and takedown, over and over again on his way to a decision. Both men have chins that can be cracked. It’s honestly another reason, given the wrestling edge, Latifi will be able to dictate where the fight takes place, as he softens OSP up on the ground.

Even with OSP finally moving to an actual camp, and his improvement, he still has largely hit his ceiling in my opinion, and will find himself getting out-wrestled, and possibly knocked out, by “The Horse Lord” Ilir Latifi.