MMAforMoney / News / Do you know your online sports betting history? 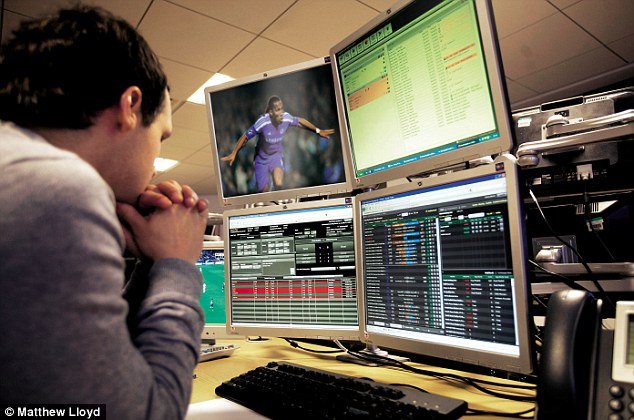 Most people don’t realize, but the online sports betting industry is still learning & growing by the day. The industry only began less than 25 years ago, in 1994, when Antigua and Barbuda passed the “Free Trade and Processing Zone Act.” This law allowed gaming operators to obtain an offshore gambling license. 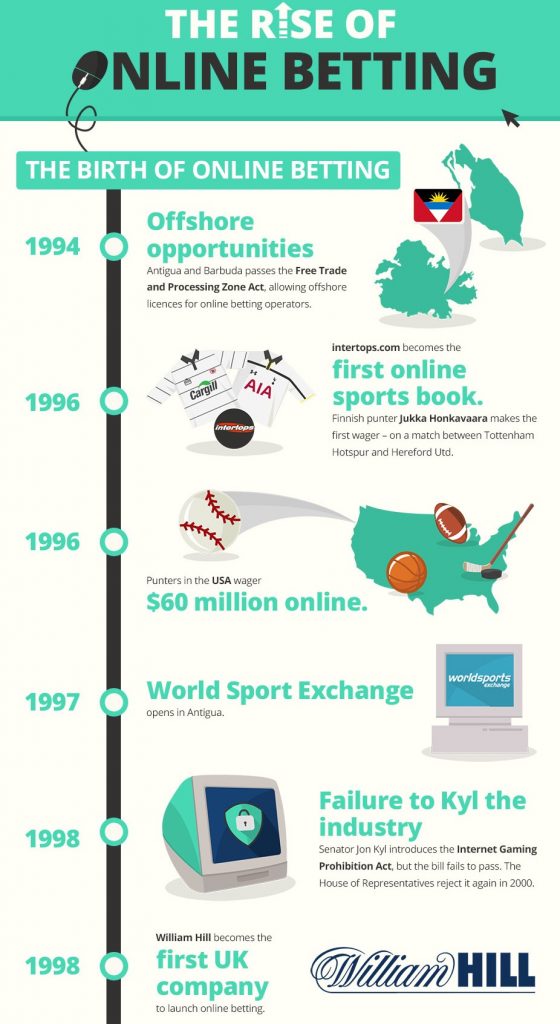 Keep in mind, at this point in time, the Internet was still in its infancy. It was far from being the mainstream internet that we all know and love today. Even after the law was passed, it still took over two years before the first sportsbook dipped it’s toes in the waters. The first online sportsbook to open up shop was Intertops, a brand that’s still open today, and one of the few that’s regularly recommended by our very own website.

A little known fact in the sports betting world, is the first ever wager made on an online sporting event was not made by an American, or anyone in North America. It was actually made by a handicapper in Finland, who wagered on a soccer match between Tottenham vs. Hereford United. But that certainly doesn’t mean that American’s were weary about wagering on sports online. In the very first year alone, Americans bet over $60 million dollars online! I’m sure it definitely helped that the online sports betting industry was a little bit like the Wild West at the time, in the sense that American Handicappers didn’t face any restrictions like they do today.

As much as American’s like to wager on sports, everyone knows that the British are not very far behind. Hence, why William Hill decided to open up shop in 1998, to become the UK’s first ever online sportsbook. The same William Hill that is now one of the biggest brands in the industry, and a household name in many parts of the world, from London to Las Vegas, to the rest of Europe, Canada, and beyond.

By this time, only 4 years after the “Free Trade and Processing Zone Act” was created, and only 2 years after the first online sportsbook opened, in 1998, revenue ballooned to over $830 million dollars online! This rapid growth caused more and more companies to throw their hats into the ring.

In 1999, the first ever sports handicapping community was created by Ken Weitzner, aka The Shrink. Ken started his career in the sports betting industry as a mover for the legendary Billy Walters, arguably the best sports bettor in Las Vegas History. This website was critical to the growth of the industry at the time. Not only did sharp sports bettors finally have a place to network with other sharps (outside of Las Vegas), but there was also a section for sportsbook owners & employees to discuss everything from accounting software to telecommunication hardware.

A year later, in the year 2000, two more marquee sportsbooks opened up, those being Betfair & Ladbrokes. Betfair, as many of you know, is one of the most popular betting exchanges in the world today, and they were also the very first. Their first day, however, was not exactly a day to remember in the company’s history, as far as revenue is concerned. Betfair only accepted a total of 36 wagers during their first day of operation!

Nowadays, everyone & their mother uses their cellphones to place wagers, and obviously sportsbooks realize this, since almost every big player in the industry has a mobile friendly website and/or native iPhone & Android app. But, in 2003, Sporting Index was on the forefront as a technological innovator in the industry, by releasing the first ever sports betting app in the U.K., called “Bet on The Move.”

2006 should be called “The Year of the Black Vale”, for offshore sportsbooks & handicappers alike. It was the year that the U.S. government passed the Unlawful Internet Gambling Enforcement Act (UIGEA), and to this day, the industry is still struggling to recover. This law forced every U.S. based sportsbook out of business, and a lot of the better U.K./European Sportsbooks (Pinnacle, Matchbook, etc…) pulled out of the U.S. Market, leaving not many options for American sports bettors. There are still a few good options that have stuck around, or have opened for U.S. Bettors since, but the tough part is transferring money to/from offshore. The days of sending your money via PayPal or NetTeller are long gone for American Handicappers. It also can be a risky proposition, if you don’t use one of the major books that have been around since the early days, since online sports betting is essentially an unregulated industry in the United States.

If the American Government ever opens up their eyes, like they sort of have for medicinal marijuana, they’ll realize THEY could make a lot of money by collecting taxes off the online sports betting industry. Despite the industry being unregulated, Americans wagered over $50 BILLION DOLLARS by 2009. That number continues to grow, year after year, and if they ever regulated the industry like Nevada, that number would increase substantially.

That growth can be attributed to newly added options like entertainment betting (Academy Awards, The Voice, American Idol), and eSports. eSports alone, has become a major market in its own right, and is still growing in leaps & bounds. In 2015, Betway went one step further, by becoming the first bookmaker in the world to launch a microsite dedicated to eSports alone. While there are some concerns about match-fixing, since the players are not technically professional athletes, they’re younger in age, and might be enticed by large sums of money…That still hasn’t stopped droves of people from betting on their favorite eSports events.

Hopefully you’ve enjoyed this article, and if you weren’t familiar with the history of the online sports betting industry, you are now! The first online sportsbook only launched about 20 years ago, but the market is still seeing substantial growth, even with major hiccups, like the “Year of the Black Vale!” Statistica estimates that the entire industry will be worth over $56.7 billion dollars (legal shops) in 2018. While other industries continue to struggle due to the economy, politics, etc…The online sports betting continues to thrive! And, if you continue betting online, you can tell your grandkids that you helped write history, since the history books are still being written today!

*Images courtesy of “Latest Betting Sites”. They have not been edited AT ALL, but they have been trimmed to format.