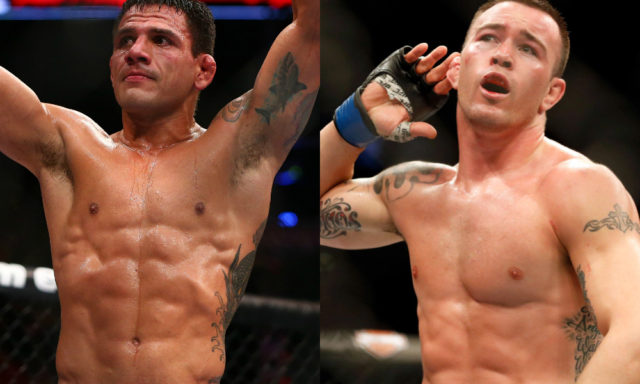 The focus of my best bet tonight Is the Interim Welterweight Championship fight between Rafael Dos Anjos and Colby Covington.

You would have to go back to Bisping vs GSP to find such a lopsided matchup that the market seems to consider a coin flip. Followers of my bets will fondly remember cashing a 2u bet on GSP in that fight. We are looking to do the same thing here.

I’m not sure what the market sees in Colby here, or what the UFC sees in him putting him in this position. I think Colby is a tremendous wrestler, but that’s about it. He’s the bigger guy here and he looks to be a great athlete. Beating Maia was a tremendous accomplishment, but it was also pretty much Covington’s ideal matchup – a guy who can’t take him down who has horrible striking. Even with that, it’s not like Covington didn’t take any damage from Maia on the feet, particularly early. I don’t see how a guy goes from doing well wrestling out wins against mediocre opposition, to being a title contender and considered a guy who can hang with the elite, on the basis of the Maia fight.

RDA should have a large striking advantage here with his crisp, aggressive Muay Thai. The speed disparity looks to me to be colossal. I find it very hard to see Colby getting the better of RDA in the striking. When it comes to the ground, I would argue RDA’s very high level BJJ is more of a weapon than Covington’s top game, so even if Covington can get RDA down I’m not convinced he can do enough to win three of the five rounds while there. RDA is the smaller guy but that is the status quo for him at welterweight and Covington is not a large welterweight himself. Covington’s great cardio is equalled by RDA.

I haven’t seen enough from Covington to definitively say he belongs at the top of this division. Maybe this is the fight where he shows us all what’s up, but he can’t be favoured based on what we know. I would not be surprised if he gets wiped out on the feet quickly or ends up guillotined if he ends up being the ‘Maia’ in this fight, desperately trying to get it to the ground.