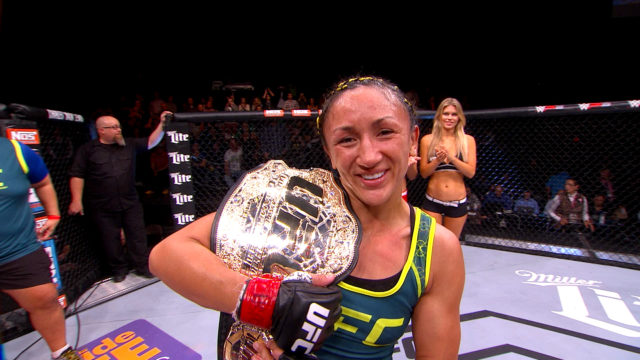 The focus of my best bet tonight is the women’s strawweight fight between Carla Esparza and Tatiana Suarez. Suarez comes in as a 1.18, -550 favourite, while Esparza is the 5.2, +420 underdog.

I don’t think there is much needed to be said about Esparza. She has good wrestling, she is surprisingly strong, she is usually facing a size disadvantage and her striking isn’t great. I am impressed with how she has come back from the Joanna fight, which I believe is still leaving a lasting impression on fans and bettors. The main thing I want to point out about Esparza is that her level of competition has always been quite high, and she has 20+ fights if you include TUF. She is a veteran UFC female at this point.

Tatiana also comes into this fight with a TUF win to her name and is undefeated so far in her career. She has a strong wrestling background and a great frame for the division. With the addition of intelligent striking for the women’s game (i.e. kick heavy), although rough around the edges, she is a problem to deal with and looks every bit a ranked UFC fighter.

What I bring to question when it comes to Suarez is her level and amount of competition. The women’s game is still young and there are plenty of female UFC fighters who should not be there and that are just going to stack losses until they are let go or be fortunate enough to be matched up against one of their own. She did beat Alexa Grasso with ease in May, but that’s not enough for me to go all in on the skills of a female UFC fighter. Before that, after winning TUF, she fought Viviane Pereira who is now in Invicta and basically one of the fighters mentioned above. Suarez won the fight handily, but aside from her rangy kicks there wasn’t much in the stand up, and for all her time on top she couldn’t get Viviane out of there.

I focus on the Viviane fight intentionally. She has the same frame as Esparza for the division and we saw Suarez completely lower herself and fight at Viviane’s range. If she does the same against Esparza she may find more experienced hands in her face, and her naked kicks caught. I don’t give an advantage either way if it hits the ground, that is if Suarez’ size isn’t overwhelming. The latter is possible, and as mentioned above this could be one of those fights where Suarez adds to the Grasso win and shows she is a contender. I just can’t have her as this big a favourite against a tough, proven veteran like Esparza.

I’ll be splitting my best bet in two for this fight, as I see an opportunity to potentially snatch a big one here if Suarez’ level of competition ends up not holding up.