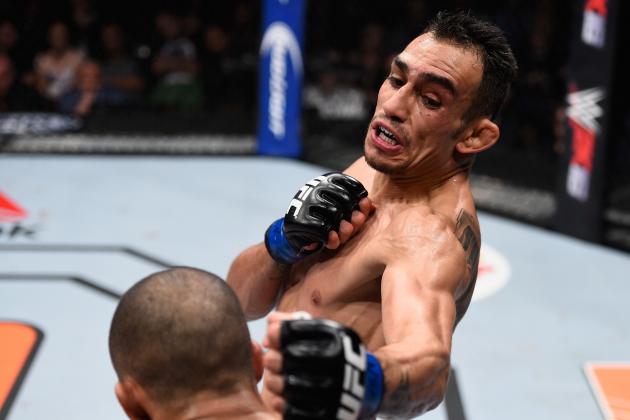 After surviving a small drought with no UFC events we are back in business for a bunch of stacked cards to close out 2016.

One of those cards falls tonight and the main event is between two lightweight fighters looking to climb to the top or even back to the top. Rafael dos Anjos is off his summer knockout loss to Eddie Alvarez, which the world saw him crash and burn to lose his 12 lbs. of gold inside the first round. Tony Ferguson on the other hand, is riding one of the most intimidating win streaks with the number eight attached to it. A win streak that began all the way back in October of 2013, with a who’s who list of fighters who have fallen before him.

Like mentioned above, Rafael dos Anjos prior to his title loss was one of the most feared lightweight competitors in the division. I wouldn’t be too quick to write him off either as we didn’t get to see his fight with Alvarez play out. While dos Anjos controlled most of the fight, it only took one right hand through dos Anjos’ defense to crack his chin and lose by referee’s stoppage at the 3:49 mark of the first round. The Brazilian native is still a very tough opponent for anyone, the once BJJ fighter turned elite all-around mixed martial artist has become one of the best fighters in his division.

As for his opponent, Tony “El Cucuy” Ferguson, he has slowly risen from the bottom of the ranks to contender status. The TUF 13 alum from many of years ago has improved in every fight he has had inside the octagon. Starting his win streak with a d’arce choke over Mike Rio at UFC 166 all the way to his d’arce choke submission of Lando Vannata over the summer, a fight that had Ferguson in trouble in early going. Compiling a professional record of 21-3 with only one loss inside the octagon, “El Cucuy” has definitely made his neighbors at 155 lbs. take notice of him.

Inside the UFC’s most stacked division and with another tough fight to both predict and call right down the middle is something that may never change. However, I slightly lean Ferguson for tonight. He may struggle in the early rounds but pick up the pace and break down dos Anjos minute by minute as the fight goes longer. Ferguson is not one to mentally give up to his opponents’ will, and I don’t see it happening tonight either. I can also see RDA being really aggressive and looking very sharp, catching Ferguson on the button early on and finishing him. However I’m still in favor of Ferguson getting the nod and finish tonight.

Tony Ferguson defeats Rafael dos Anjos by TKO in round 3.

For the gamblers out there, the price on ‘Tony Ferguson wins inside the distance’ is now (+164) on 5Dimes, it has been much reduced from (+233) which is what I grabbed.