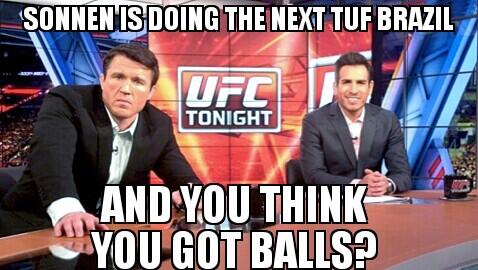 WANDERLEI SILVA AND CHAEL SONNEN, WERE ANNOUNCED AS RIVAL COACHES OF THE UPCOMING SEASON OF UFC’S “THE ULTIMATE FIGHTER” REALITY SHOW IN BRAZIL.

Chael Sonnen will still have his UFC 167 fight with Rashad Evans, but after that he will be opposing coaches with his media circus enemy Wanderlei Silva. I don’t see why they still want to go through with the Rashad and Chael fight. It would seem they are just parlaying two headliners to sell PPV’s. Aside from the fact that the fight has a potential to be a barn snoozer the fight has zero credibility within the division. They are both analysts that work side by side and seem to get along with one another. That is not two people that we want to see fight. He has made a career of making people hate him, including fans and fighters. A strategy in my opinion is brilliant marketing. In a sport dominated by utter respect for the opposition, Sonnen walks off the beaten path and you either love him or hate him.

This bitter rivalry started long before this fight announcement was even considered. Chael took upon himself to be the most controversial figure the UFC has even seen. Shortly after his first fight with Anderson Silva, who was champion at the time. To speculate, maybe he thought he could climb up the ranks quicker by creating a fight that people would want to see. How could he possibly do this? After just loosing to the champ and dropping in the ranks, how was he going to leap frog all of these other guys to get a second crack at the king pin who he dominated for 90% of the first fight? An all out verbal attack on the country of Brazil and its people is how. While some of us recognized what he was doing, the Brazilians didn’t make light off it and they still do not. Chael Sonnen didn’t take on his “Amercian Gangster” role until he transformed himself into one. Maybe this attack didn’t come out of thin air in hindsight. Having lost to only Brazilians recently might get your blood boiling at some point.

“Greetings from Sao Paulo! I’m learning the language: breakdancing in the Special Olympics is called Capoiera and cocaine is called brunch.” – Chael Sonnen

When the second fight with Anderson was on, and Chael had to do media in Brazil and there was some concern about saftey even before he entered the cage. There was two separate incidents where Brazilian fans came up swinging on him cited by Dana White, and thank God there was security there to dismatle the situation. A number of Brazilians have requested fights with Sonnen after his drastic comments toward their home country. I really dont blame people for getting upset. People outside of America talking bad about the U.S. does offend me to a certain extent, and considering the living situations that some Brazilians have had to live through (see Jose Aldo and Junior dos Santos) I can only try to wrap my brain around the disrespect these loyal countrymen must feel. Country Pride vs Caricature. There is no winner here but dam it is entertaining. I guess that is a debate for another day. Revenge from Wanderlei could be expected considering Sonnen’s last opponent. Check out the video below; a link goes to a MMATKO.com link. You can see his body language during the fight, during the finish, and the aftermath. They are all very telling and different.

Not too long ago before the Shogun fight Chael had already called out Wand on UFC Tonight and had made numerous remarks about him in a unfriendly fashion. He has recently even made “The Ax Murderer” a punch line and a send off to the commercials for the show. For whatever reason Chael has picked a fight that is going to happen now and we are going to see everything unfold in what is sure to be a very entertaining season of The Ultimate Fighter Brazil. What me and a lot of people are worried about is can Sonnen survive a whole season of filming down there without something going seriously wrong? People are out for blood and maybe some out for his life. It is definitely a far cry from West Lynn Oregon and one has to wonder if he has bitten off more than he can chew. We can only hope it stays between the two competitors. Here is some choice words from Wand when they ran into each other at the Mr Olympia competition where a fight almost broke out in public.

“You are fearful,” Silva said. “You are afraid of me. And I will beat you up. I wanted to beat you up today. But I’m a professional, and I don’t fight in the street. Real men talk face to face. With me the talk is straight up. I will punch your face. It will happen soon. … The beating I will give you will be my gift to the people.”

In the last battle of words we have our king of MMA media with his latest verbal assault. You can catch the latest and greatest on UFC Tonight where he is a host and I am sure he is going to sell his position as American Gangster and not pump the brakes in any regard to this situation.

“Listen Wanderlei, I will do a home invasion on you. I will cut the power to your house and the next thing you’ll hear is me climbing up your stairs in a pair of night vision goggles I bought in the back of Soldier of Fortune magazine. I’ll pick the lock to the master room door, take a picture of you in bed with the Nogueira brothers working on your ‘jiu-jitsu.’ I’ll take said quote unquote photograph, post it at dorksfrombrazil.com, password – not required, username – not required. That, Wanderlei, is how you threaten someone. Dummy.” – Sonnen