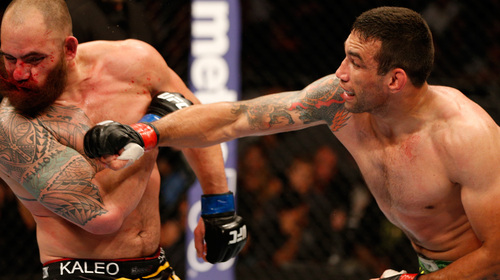 I believe Fabricio Werdum will show much better defense this time around, as compared with his previous fight, and will play around with his striking & far better technique. He trains under one of the best striking coaches in MMA, the legendary Master Rafael Cordeiro (he’s trained Anderson Silva, Shogun, all of the old Chute Boxe fighters, etc…) Browne’s chin can be cracked, and even at 39 years old, Werdum should have enough pop to get the job done. I lean towards a late TKO, but if it happens as early as round 1, it wouldn’t shock me.

I’ve seen Medeiros going for guillotines from the clinch several times in the past 5-6 fights. In this fight, I can definitely see that happening, especially considering that Spencer doesn’t have the grappling to compete at the same high level of Medeiros. KO from either guy wouldn’t shock, but the value lies here with this prop at (+480).

Another prop on the UFC 203 card that holds quite a bit of value. Lentz’s opponent, McBride, is not only taking the fight on short notice, but he also significantly struggled to cut weight. Matchup-wise, Lentz is the better fighter in most areas. Simply put, “Everything you can do, I can do better! 🎼” I believe Lentz will take McBride down repeatedly, with relative ease, and expect to see a late ground-and-pound-induced TKO.