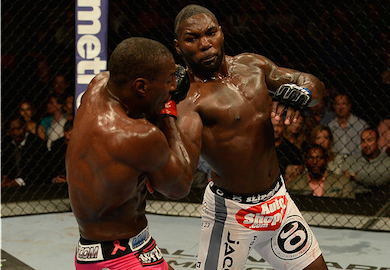 Anthony ‘Rumble’ Johnson vs. Daniel Cormier 2
At UFC 187, Anthony Johnson and Daniel Cormier faced off for the first time after Jon Jones was stripped of his title, due to a felony hit & run accident, in which he was at fault. The fight was supposed to be ‘Rumble’ Johnson vs. ‘Bones’ Jones, after ‘Rumble’ had finished former #1 Contender Alexander Gustafsson. ‘DC’ replaced Jon Jones, having been the last man to contend for the title, and the clear Number 2 in the division. After nearly finishing ‘DC’ early in the fight, ‘Rumble’ was submitted in the 3rd round.

What’s different this time? At their cores, aren’t ‘DC’ and ‘Rumble’ the same fighters they were then just shy of 2 years ago? Between their first fight and now, Anthony Johnson has been on the war-path, dispatching the who’s who of the Light-Heavyweight division, on his road back to the title! Also, within those 2 years, Johnson has been spending a lot of training time with Neil Melanson to fix his grappling short comings. ‘Rumble’ is a more complete fighter, with just as dangerous of an offensive game, and sharpened up defense, since their first meeting.

While ‘Rumble’ has stayed relatively active, Cormier, however, has only fought twice. A life and death war against Alexander Gustafsson, and a lackluster/safe performance against an aging Anderson Silva. In both of those fights, ‘DC’ got considerably hurt, and rocked badly, against Gustaffson. Add that to all of Cormier’s recent injuries, and busy “Analysis” schedule, he is at best a slightly worse version of his 2015 incarnation.

PREDICTION:
Not much will change in this fight from the first time around. It will show Johnson aggressive early, but with a little more of him feeling out his shots, rather than a straight blitz. Cormier, who never actually took a clean blow from Johnson the last time (top of the head, not near the jaw or temple), will have to strike in the early going to find the clinch, in order to set up the rest of his game. Daniel has often left his head ducked low in the clinch, catching many uppercuts from past opponents, and if he eats just one clean uppercut from ‘Rumble’, it’s lights out (see ‘Rumble’ vs Little Nog). This time, the accumulation of damage, and injuries, will spell disaster from Johnson, as he will get put to sleep. We will crown a new Light-Heavyweight Champion at UFC 210, and in my opinion, the most legitimate threat to Jon Jones, upon his octagon return.