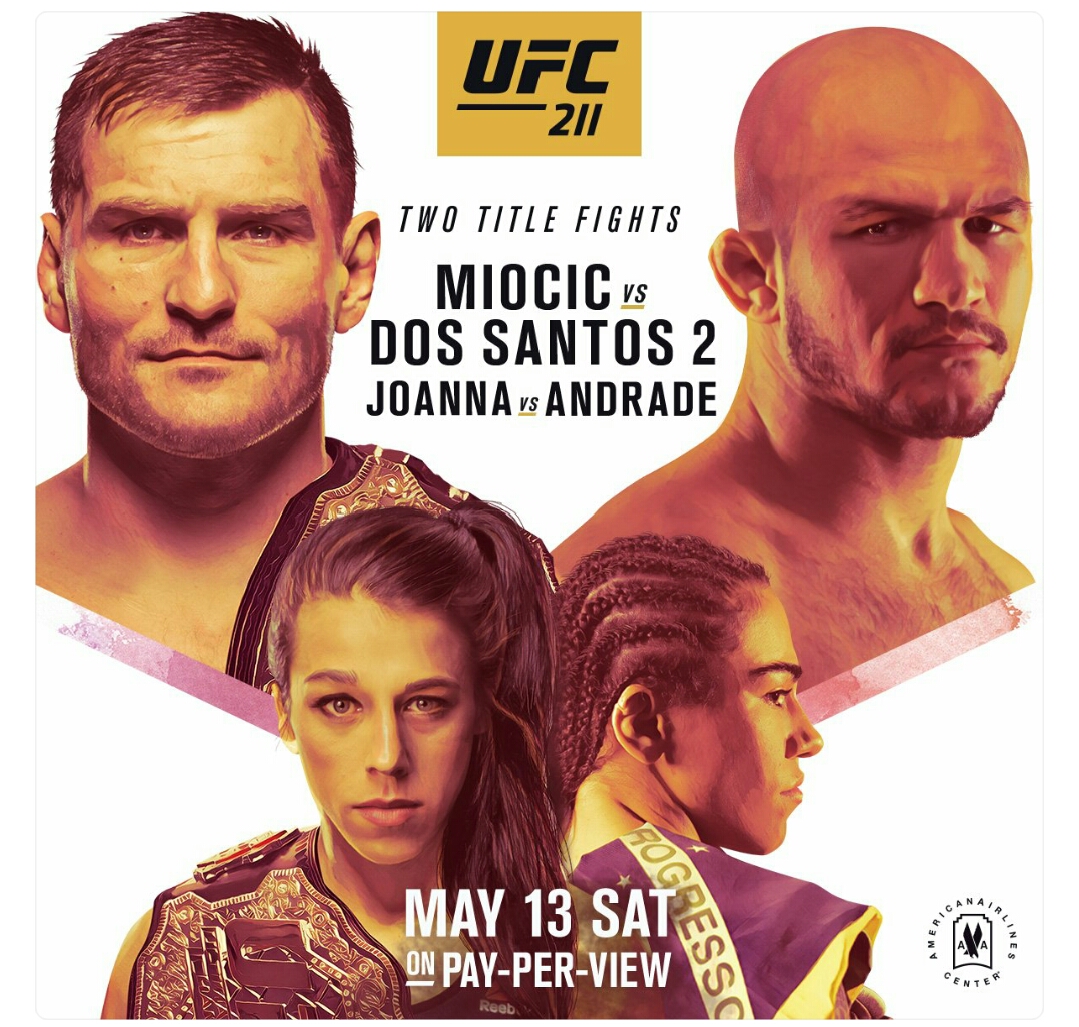 UFC 211 is easily the best card of 2017 so far. The card is wired with talent from the opening all the way to the double main event featuring two title fights.

I absolutely love this card from a betting perspective and believe there are a lot of great spots for money to be made. Oddsmakers have several fights lined up very close in odds and that makes for great money to be made. I hope I can bring home some winners for you!

This is probably my favorite fight on the entire card. You have a jiu-jitsu wizard who has won many championships all over the world and has successfully transferred over to MMA, against a former backyard fighter-turned superior technical mixed martial artist. Masvidal opened up as the underdog which I was a little surprised at (it was like +115 or so), but he also might be one of my most confident plays. Obviously like most Demian Maia fights, in order for Maia to win he must get the fight to the ground where he holds the advantage over just about any fighter on the roster. Masvidal is a very solid well-rounded fighter but he might have a hard time if he is taken down. Standing however, he lights up Maia all day with some of the most crisp boxing in the UFC coupled with great body shots and leg kicks. Maia, the 39-year-old vet, has to run into father time eventually and looked pretty awful on the scales. Masvidal can probably avoid the takedowns and let Maia gas himself out, after that Masvidal will take over the fight and finish Maia. Masvidal might even be able to survive on the ground long enough to stand back up; similar to what Robert Whittaker did with Jacare Souza. He just remained very calm until he had an opening to get back to his feet. My official prediction is Masvidal by TKO in probably round two, maybe late round one.

Another fantastic fight I’m looking forward to, in which it’s possible we could see a passing of the torch. Yair Rodriguez is a very exciting and young prospect. The 24-year-old is still very young into his MMA career and is still pretty “green”. Meaning, he does have holes in his game which the average viewer just might not of picked up on yet. I’ve seen commentators and even other people say he has the best or even some of the best kicking technique in the UFC, which couldn’t be more false! Yair definitely has potential to progress unlike other prospects the UFC has tried to hype up (Like Paige Van Zant), however he does lack the fundamentals. Yair’s toughest fight was against Alex Caceres; and his best win? Probably Andre Fili. I can’t count the BJ Penn fight because that wasn’t even a contest. I’m not hating on Yair or disparaging his skills, as he can win this fight but it’ll probably need to come by knockout. I just believe Yair Rodriguez is being overhyped and overrated early on into his career. Edgar is the superior fighter here with the better technique, wrestling, and cardio. As long as Edgar can avoid the sneaky kicks of Yair then I have a lot of confidence in Frankie Edgar to get his hand raised. My official prediction is Frankie Edgar by decision.

For the first championship fight of the evening, you have the Polish power of “Joanna Champion” taking on the Brazilian Brute Jessica Andrade. I don’t want to get too into detail on this one, as Andrade’s best path to victory is to walk Joanna down and do a John Lineker type of fight. Where Joanna would just be against the cage to let Andrade tee off on her. However, Joanna is champion for a reason and has successfully defended her title on numerous occasions. Joanna won’t get baited into getting backed up into the fence and will simply circle around Andrade and light her up on the feet, where she holds the CLEAR striking advantage along with the ever-so-clear volume edge. You can probably compare it to Lineker/Dillashaw; Dillashaw simply circled around and out-struck and grappled Lineker to the easy decision win. Joanna most likely won’t win the grappling exchange on most occasions, but she can still circle around and counter Andrade with the significant striking advantage. And as the fight goes on it should favor Joanna as her cardio is really, really good. My official prediction is Joanna Jedrzejczyk to win by decision.

Stipe Miocic looks to defend his title for the second time in a row against a returning JDS who has been out of action for a little over a year. Miocic is coming off a first round finish against Alistair Overeem, and for what it’s worth despite winning, I think he looked pretty bad in that fight. He also looked really bad on the scales. Benefit of the doubt to Miocic, because he still trains part time as he still has a job as a fire fighter/paramedic in Ohio. I don’t necessarily think that’s a good thing for him if he truly wants to improve and hold onto his title. JDS hasn’t looked good in his recent amount of fights. He looked pretty bad against Overeem which he lost to by TKO, and looked bad against Miocic despite still winning the fight! Dos Santos looked to had found a resurgence when he fought Ben Rothwell. Looking like his old self and actually improved too. Using a very sharp jab, circling around, and just not looking shot like we had seen him look against Miocic and Overeem prior to the Rothwell fight. I also think switching camps to American Top Team (which has some of the most talented fighters at their gym including Jorge Masvidal and Yoel Romero) has helped him a lot. I think Miocic will need to try and end the fight early in the rounds if he wants to retain the title as his cardio isn’t something to really put faith in. He slowed down midway through the first JDS fight which allowed JDS to win the fight. Dos Santos also has the much cleaner boxing technique, better cardio, and his defensive wrestling is solid enough to where he shouldn’t get taken down by Miocic. I think the improved Dos Santos (who is way better than the version that fought Miocic the first time) outboxes Miocic to probably a decision win like last time. My official prediction is Junior Dos Santos by decision.

Good luck, thanks for reading!