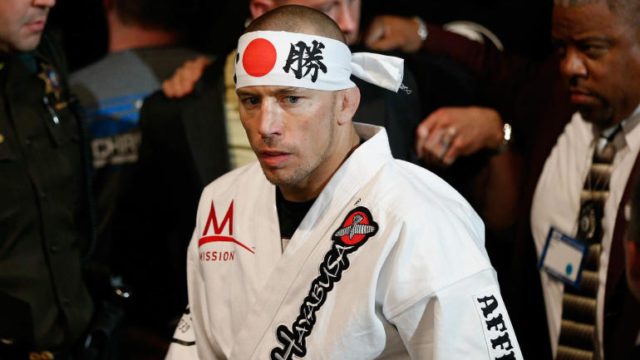 The focus of my bet tonight is the middleweight title fight between defending champion Michael Bisping and the returning Georges St-Pierre.

I’m not going to spend any time describing these two fighters to readers as everyone should know what these guys are about and besides that, I don’t think this is a fight where the odds are determined by, or represent, respective skill levels. GSP’s four year hiatus seems to be the key influencer here and I’ve spent a lot of time thinking about it’s impact on the odds, never being able to reason it. The way I started thinking about this fight was to consider what the odds would have been had this happened a few years ago and I believe GSP would have been a relatively heavy favourite, then trying to reconcile that with the odds we see now (almost even money).

Four years is a long time to leave a sport like MMA, but Georges did not leave the sport – he stopped competing. He never stopped training ‘for fun’. He was quite open about the toll the constant title fights were taking on him, mentally and physically, and I can’t fault his decision to step away. If you’ve been paying attention to the build up to the fight I think it’s pretty clear this is a far more relaxed and happy GSP. He is even excited! He looks to be in excellent physical condition, which is your first concern after a hiatus.

The main argument I’ve seen for why GSP could be in trouble here is that he has aged and the game has changed. Both of these are true, but GSP is not competing with the game of MMA in the octagon, he is competing with a veteran older than himself.

What may also be swaying people is that Bisping is the middleweight champion and talks a great game. The reality is that although he did knockout Luke Rockhold to win the championship, and nobody can take that away from him, his two other fights in 2016 were five round battles against Anderson Silva and Dan Henderson, both past their prime and in their forties. He took serious damage in both of those fights to add to his permanently injured eye and you could argue the decisions either way. Before that you have decisions with Thales Leites and CB Dolloway. Not exactly inspiring. Bisping is coming off of over a year lay off himself, and he does all of his training out of the RVCA gym where one would assume his main training partner from a wrestling point of view was Jake Ellenberger. I don’t think that is adequate preparation for GSP. I don’t think GSP would have returned to the octagon at middleweight if the champion was a top tier, new breed fighter.

As for the size difference, I think it has been exaggerated. Obviously Bisping is the bigger man, but GSP actually has a slight edge in reach, and being a little shorter is not a hindrance to his takedown heavy game, quite the opposite. I believe he will outmatch Bisping as a grappler and has probably added many BJJ wrinkles to his game since we last saw him – I would argue the lack of real BJJ finesse is the primary cause of the extended nature of his fights in the past.

Coming back to my main point I doubt I would hear much argument against the idea that Georges would have been a heavy favourite in this fight a few years ago and I don’t see how that much has really changed with regards to the matchup. Maybe Georges comes back as a shadow of himself, but that seems like more of a leap of logic than what I propose. I feel like we could be seeing a fighter who should be a 1/3 favourite being offered at even money.