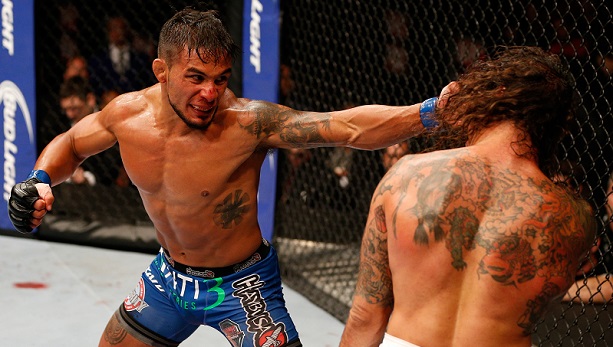 Andre Fili is looking to break his streak of alternating wins and losses tonight against Bermudez. Each loss has come as he’s taken a step up in competition, which is exactly what this is. Fili is the lone Team Alpha Male product with little to no wrestling ability, and won’t be able to keep the fight on the feet with Bermudez, provided Dennis doesn’t get sucked into a brawl with him. Bermudez holds a substantial edge in the wrestling department, and has the power edge. If he fights smart, Andre will barely be on his feet during the 15 minutes of this fight.

Dennis Bermudez is one of the real wasted talents in the UFC Featherweight Division. Skill for skill, Bermudez is a top three fighter with a sub 25 chin. Many times over in past fights, Bermudez will be the clear favorite, and the winner, until his chin gets touched and his lights get put out. Dennis has a horrible past of falling into brawls, throwing wild punches, and getting clipped. Luckily, in this fight, he faces a fighter not known for power striking (Not that it takes that much to do so). Needing a win badly here, Bermudez has the incentive to fight smart, and control Fili on the mat, on his way to a Ground and Pound finish, in the 2nd or 3rd round.