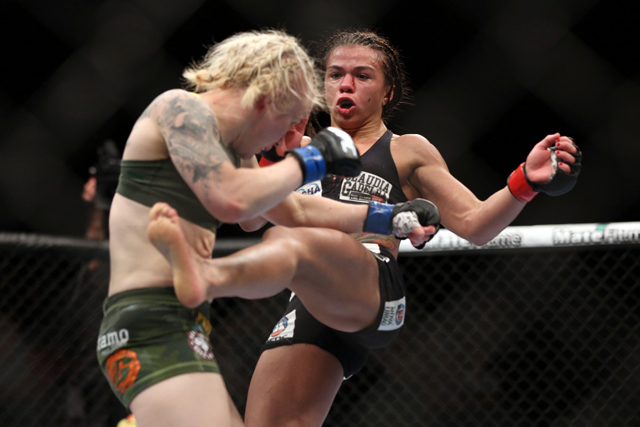 Pedro Munhoz Wins via Decision (+275)
This should be a close contest, but the reason I’m leaning Pedro Munhoz, is because he has a way higher fight IQ than Justing Scoggins, AND will have the crowd on his side. Whatever he does, it will be cheered by the crowd, and that may very well sway the judges in a close fight. At almost 3/1, this deserves a shot.

Manny Gamburyan Wins via Decision (+218)
“The Manvil” has a clear advantage in this fight vs Johnny Eduardo, and that’s his grappling. If he’s able to utilize his clinch work, and mix in some takedowns, then he can easily grind out a decision. At +218, that’s definitely a good bet. Don’t go crazy though, as he could get cracked by a well-timed shot by Eduardo.

Gadzhimurad Antigulov Wins in Round 3 (+2200)
The russian Gadzhimurad Antigulov will most likely need to weather the early storm, if he wants to win this fight. His opponent Marcos Rogerio de Lima is a stud that posseses a nightmare one hitter quiter, BUT, if he doesn’t put his opponents away in the first round, he usually gasses and quits. If they go to round 3, I believe this prop will be live. Bet365 has it set at +2200, which is a no brainer.

Jack Hermansson Wins Inside the Distance (+120)
“The Joker” Hermansson is a bad matchup for Cezar Ferreira, who is most likely going to need to grind out a decision if he wants to win. Hermansson is a decent fighter, and he does have the ability to scramble back to his feet. In a fight where striking will dominate, I just see one winner, and that is Hermansson. I think he gets a KO win, but a submission wouldn’t surprise me either.

Kamaru Usman Wins in Round 3 (+2200)
Another fight which features a guy who is usually strong in the first round, but then gasses massively as the fight goes on. If Warlley Alves doesn’t get the submission early, he’ll most likely lose a decision, or succumb to a late stoppage. Usman is no doubt one of the best wrestlers. He can grind out anybody. The problem is, that he lacks finishing ability… He just feels “safe” laying on top of his opponents, and riding out the clock. However, if he wants to make a statement in the division, he’ll need to start now. This time around, I truly believe the opportunity will present itself. At almost 22-to-1, I have to take the shot.

Claudia Gadelha Wins in Round 3 (+1100)
For the first time in a while, Claudia Gadelha is facing a girl that has a worse gastank than she does. Now, I’m not saying that Gadelha’s gastank is “bad”. She’s pretty athletic, it’s just that both of her recent losses have come because she had a weaker gastank than her opponent. For this fight, I’m expecting Gadelha to do whatever she wants in the grappling department. Pass guard, mount, ground ‘n’ pound, look for submissions, etc. Casey is a tough girl, and she will be game for several minutes. But come round three, she’ll probably be gassed, which should be an opportunity for Gadelha to get right back in the mix.