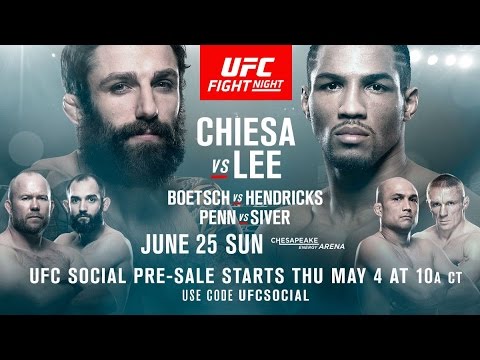 This is more of a quick write-up for this pick. I wanted to offer a very nice and valued line for all of you on tonight’s UFC card despite being pretty busy today.

The bet I’m looking at is in the Hendricks vs Boetsch middleweight fight. Before the whole weigh-in screw up by Hendricks yesterday (came in 3 lbs. over), he was as high as -285 at most books. 5Dimes to be more specific. It got bet down a little and even under -200 at one point. Some more action came in and he was staying a little over -200 up until he missed weight. After missing weight he got as low as -145 from what I saw on 5Dimes.

I was looking to have a bet on Hendricks after the weigh ins (because I like to usually place my bets the night of, or day of the event), after seeing Hendricks miss weight it sent him skyrocketing down in price to a great line. He’s currently around -150ish at most books such as 5Dimes and Bookmaker.

Despite Hendricks not looking so great in his recent fights and just recently ending a 3-fight skid by besting Hector Lombard to decision, has Boetsch looked any better? Answer is no, he definitely has not. Tim Boetsch is definitely tough, but he isn’t the same fighter he once was. He has definitely regressed at the age of 36. He has even been finished by Ed Herman of all people. While I don’t necessarily expect Hendricks to get a knockout here or anything, because he seems to have lost his killer instinct as of late, I do think Hendricks defeats him. Hendricks is the better technical striker, with the better chin, and the way better wrestling despite giving up size.