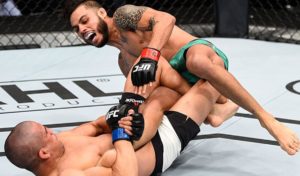 The focus of my best bet tonight is the bantamweight fight between Joe Soto and Brett Johns.

The market has Brett Johns as the favourite here, probably assuming that his size advantage and wrestling heavy base will be enough to grind down Soto over three rounds. His 14-0 undefeated record must also be a factor. This looks like a huge step up for Johns as in his two UFC fights to date he has only faced entry level fighters, winning decisions in both of those fights.

Joe Soto is coming in to this fight on a three fight win streak. He appears to have rounded out his game quite well and has finally made it ‘click’ inside the octagon after a run of three defeats. The market doesn’t seem to be respecting him or his higher level of experience here.

Johns’ style of fighting is fairly simple. He is willing to appear to bang it out on the feet but his end game is always to open up an opportunity to take the fight to the ground and dominate there using his strong grappling base. On the feet he isn’t too bad offensively, certainly not gun-shy. He varies his attacks well and will throw lead uppercuts for fun. His striking defence, on the other hand, is pretty terrible though he looked like he had been working on that for his most recent fight. He will shoot take-downs in the open but they can be a little obvious and their goal is often to push the fight to the cage where he uses his judo experience to find imbalances and trips. On the ground he is often content to control the position and land strikes. He isn’t particularly threatening in that regard.

Soto has been looking to put a complete game together to be able to challenge the top of the division after losing to TJ Dillashaw in a somewhat impromptu title fight. He is quite technical when striking and uses leg kicks well. Two drawbacks to his game in that area are his lack of power in his hands and quite often he is a bit too passive for my liking, leaving it late to press on and dominate when he likely could have done so earlier. When it comes to his grappling I believe he is flying under the radar as a submission specialist in this weight division. His blackbelt under Dave Terrell is extremely legitimate and he has been putting that to use. He almost secured a gogoplata against Tanaka, before rear naked choking Chris Beal in the third round, and heel hooking Marco Beltran. He is not lacking for tools in that area and his guillotine is nasty too.

I disagree with the market on this one and actually have Joe Soto as the favourite. I think he is the more technical striker and it’s only a close match-up in that area if he isn’t active enough. Johns has the size advantage and could well be successful in taking the fight to the ground, his likely game plan, but I don’t think he has faced anyone like Soto there before. Soto is a difficult guy to grind out as he will not stop attacking from the bottom with both submissions and sweeps. It is going to be a challenge for Johns to ride out this fight on top.

My position is that Johns will get caught by a superior grappler when he tries to take this to the floor. Quite possibly via a guillotine as he doesn’t do a great job of protecting his neck on take-down attempts. I wouldn’t talk anyone out of taking Joe Soto straight up, since it is just a three round fight, but I’m aiming a bit bigger than that and am going to fire on a generous submission prop.